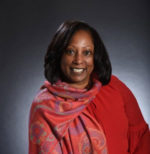 Yolanda McClean is the 2nd Vice President of CUPE Ontario and has been for almost a decade.  Prior to this, Yolanda served as Diversity Vice-President for Racialized Workers in Ontario.  She was re-elected to this position at the National level of CUPE, making her the longest serving Diversity Vice President in our National Union’s history.

Yolanda is responsible for providing leadership support to areas of the union in establishing equity structures, committees, and changing their leadership structures to have designated representation for racialized CUPE members.  She assists with bargaining materials for locals across the country on issues of racism in the workplace and supports CUPE as an employer in attempts to bargain for employment equity provisions..

Yolanda is the recipient of the “Ed Blackman Award” that recognizes the contributions and leadership of a racialized CUPE member.  Yolanda (was given this award) the successful nominee for this and was awarded by a committee of members from across Canada.