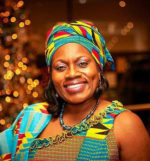 Sarah Onyango is a translator by trade and has become well-known on Ottawa’s community television and radio scene since the late 1990s. However, broadcast journalism was not a career her parents wanted for the eldest of their five children.

Born in Nairobi, Kenya, Sarah spent parts of her childhood and adolescence in Kenya, Tanzania, Belgium and Canada. She first came to Canada, where her diplomat father was posted in 1980. Over a decade later, after earning a B.A. in Translation at the University of Ottawa and a Master’s in Linguistics from the Université de Franche-Comté, France, Sarah returned to Canada in 1992.
Sarah’s community service has been recognized with various awards: including the United Way/Centraide Ottawa Community Builder Award (2008 & 2011), the Queen Elizabeth II Diamond Jubilee Medal (2012), the Ontario Volunteer Service Award (2012), the Leading Women Leading Girls Building Communities Award (2014), the Ontario Black History Society’s Mathieu Da Costa Award (2016), and the #OC150 award (2017).