R IS FOR REPARATIONS – Speaking their truth 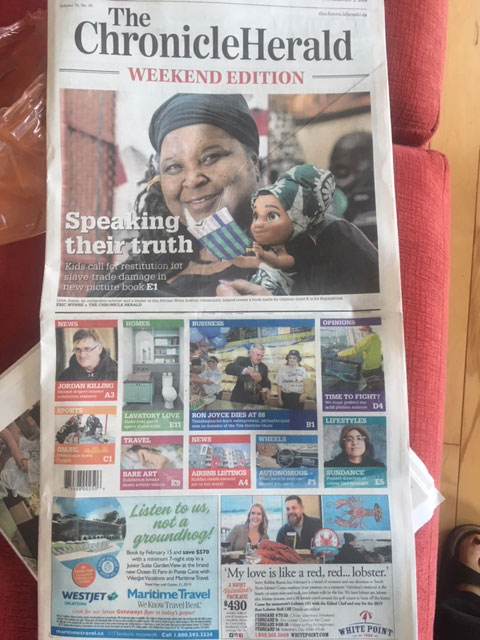 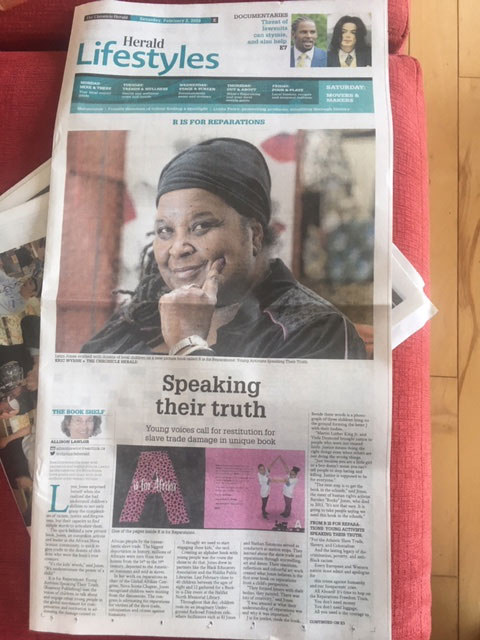 R IS FOR REPARATIONS

Read between the lines with journalist and author Allison Lawlor as she explores the Nova Scotia book scene and chats with local authors in her weekly column.

Lynn Jones surprised herself when she realized she had underrated children’s abilities to not only grasp the complexities of racism, justice and forgiveness, but their capacity to find simple words to articulate them.

The spark behind a new picture book, Jones, an outspoken activist and leader in the African Nova Scotian community, is quick to give credit to the dozens of children who were the book’s true creators.

“It’s the kids’ words,” said Jones. “We underestimate the power of a child.”

R is for Reparations: Young Activists Speaking Their Truth (Roseway Publishing) uses the voices of children to talk about and engage other young people in the global movement for compensation and restitution in addressing the damage caused to African people by the transatlantic slave trade. The biggest deportation in history, millions of Africans were torn from their homes from the 16 th to the 19 th century, deported to the American continent and sold as slaves.

In her work on reparations as chair of the Global Afrikan Congress, Nova Scotia Chapter, Jones recognized children were missing from the discussions. The congress is advocating for reparations for victims of the slave trade, colonization and crimes against humanity.

“I thought we need to start engaging these kids,” she said.

Creating an alphabet book with young people was the route she chose to do that. Jones drew in partners like the Black Educators Association and the Halifax Public Libraries. Last February close to 40 children between the ages of eight and 12 gathered for a Bookin- a-Day event at the Halifax North Memorial Library.

Throughout that day, children rode on an imaginary Underground Railroad

Freedom ride, where facilitators such as El Jones and Nathan Simmons served as conductors at station stops. They learned about the slave trade and reparations through storytelling, art and dance. Their reactions, reflections and colourful art work created what Jones believes is the first ever book on reparations from a child’s perspective.

“They formed letters with their bodies, they painted. There was lots of creativity,” said Jones.

“I was amazed at what their understanding of reparations was and why it was important.”

J is for justice, reads the book.

Beside these words is a photograph of three children lying on the ground forming the letter J with their bodies.

“Martin Luther King Jr. and Viola Desmond brought justice to people who were not treated fairly. Justice means doing the right things even when others are just doing the wrong things.

“Just because you are a little girl or a boy doesn’t mean you can’t tell people to stop hating and killing. Justice is supposed to be for everyone.”

“The next step is to get the book in the schools,” said Jones, the sister of human rights activist Burnley “Rocky” Jones, who died in 2013. “It’s not that easy. It is going to take people saying we need this book in the schools.”

FROM R IS FOR REPARATIONS: YOUNG ACTIVISTS SPEAKING THEIR TRUTH:

“For the Atlantic Slave Trade, Slavery, and Colonialism And the lasting legacy of discrimination, poverty, and anti-Black racism Every European and Western nation must admit and apologize for this crime against humanity and our foreparents’ cries.

All Aboard! It’s time to hop on the Reparations Freedom Train.

All you need is the courage to

Lynn Jones worked with dozens of local children on a new picture book called R is for Reparations: Young Activists Speaking Their Truth.

One of the pages inside R is for Reparations.

speak your truth and make your demands for social justice.

All you need is the alphabet to find your words.

R is for Re-pa-ra-tions! Reparations is what we want and we want it now.

Get ready! The train is pulling out of the station. Get ready. Get set. Let’s Go!”

A book launch, as part of African Heritage Month, will be held on Feb. 23 at 10 a.m. at the Halifax North Memorial Library.