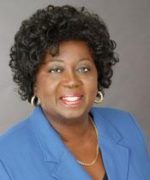 Dr. Augustine was born in Grenada (West Indies) and came to Canada in 1960. She attended the University of Toronto, where she earned Bachelor of Arts and Master of Education degrees. She became an elementary school principal with the Metropolitan Separate School Board in Toronto.

From 1988 until 1993, she was chair of the Metro Toronto Housing Authority. Dr. Augustine was the first African-Canadian woman to be elected to the House of Commons. She was elected in the riding of Etobicoke-Lakeshore in 1993 and sat in Parliament until 2006. During this time, she served as Parliamentary Secretary to the Prime Minister, Minister of State for Multiculturalism and the Status of Women and was a Deputy Speaker.

In 1995, Dr. Augustine introduced the motion proposing Black History Month in Canada.  That motion was passed with all party consent.

She has shared her expertise and enthusiasm with others as a member of several community boards, including those of York University, the Hospital for Sick Children, the Stephen Lewis Foundation and Harbourfront Corporation. She was also a former National President of the Congress of Black Women of Canada.

She has been honoured by many organizations for her leadership and community involvement. In 2009, the Women’s Executive Network named her as one of Canada’s Most Powerful Women: Top 100 Awards winners. The Girls’ Leadership Academy of the Toronto District School Board bears her name.  She was awarded the Luminary Award by the University of the West Indies in 2006, and has received honorary Doctor of Laws degrees from the University of Toronto, Guelph University, McGill University,  York University, Trent University and Ryerson University.