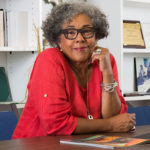 Mrs. Marjorie Villefranche is the executive director of Maison d’Haiti, a community and cultural organization in Montreal focused on the social inclusion of new immigrants of all backgrounds and other vulnerable populations.

Mrs. Villefranche has been dedicated to education and defending immigrant women and illiterate people for more than 40 years. The fights against racism, discrimination and all forms of exclusion are part of her daily life. She participated in the Women’s March of Bread and Roses (Du pain et des roses), the work of the Montreal‘s Task force on democracy (2002) and the Montreal Women’s Action and Urban Safety Committee. Currently, she presides on the Saint-Michel‘s neighbourhood council.

A specialist in the history of the Montreal’s Haitian community, Mrs. Villefranche participated, in 2014, in’’ Histoires d’immigrations’’ a project conducted by the University of Quebec in Montreal and the National Library and Archives of Quebec. She has also produced three documentaries: Port-au-Prince ma ville, District 67, and Petites mères.