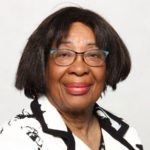 Dr. June Marion James, O.M, Hon. Dip (RRC) BSc, BSc (med), M.D. FRCPC, FAAAAI, born In Trinidad and Tobago   came   to Canada   in   1960   for university studies in Manitoba, with a career goal of Medicine. She completed her Bachelor Degree of Science in 3 years, and was   accepted to Medical schools in the United States and Canada.  In addition to cost, June learnt that she would be breaking new ground by being the first woman of color admitted at the University of Manitoba School of Medicine, so she made the decision to remain in Winnipeg.

Following her graduation in 1967, Dr. James did her residency training in Paediatrics, then became a Paediatric Fellow in Hematology /Oncology.   At that time, chemotherapy options for   children were limited for Blood Cancer and clinical outcomes were poor.  An immunoglobulin   discovered almost simultaneously in Japan and   Sweden named Immunoglobulin E (IGE) was now found to play a pivotal role in Allergy and Asthma. She changed   to   this   new   medical   sub-speciality entering in 1972 as a Clinical Fellow.