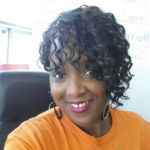 Marie France Fleurantin is the 2nd vice-president of Unifor Local 62. She was born in Montreal of Haitian. She studied at Collège Montmorency in Laval in human science with a social profile. She has a 24 year old daughter.

She currently works at Bombardier Aerospace, Center of Excellence in Pointe-Claire for 10 years. When she started working at Bombardier, it was an honour to work for such a large company and also it was her first experience as a union member.  Her employment at Bombardier, her employer, was nevertheless a surprise since it was a job mainly made up of men.

Her involvement in the union began when she realized that women did not really have their place in the local union and that this was even less the case for members of color who are a small minority. She got involved in order to learn more about this union subject and to support it.