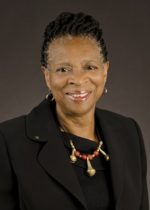 Judge Juanita Westmoreland-Traoré was appointed to the Criminal and Penal Division as well as the Youth Division of the Court of Quebec in April 1999. Since retirement in 2012, she continues to sit as a supplementary judge.

Ms Westmoreland-Traoré was admitted to the Bar of Quebec in 1967 and The Law Society of Upper Canada in 1997; she specialized in immigration and citizenship law, human rights, family law and non-profit organization law.  She was a professor in the Department of Legal Sciences at the University of Quebec in Montreal from 1976 to 1991 and from 1996 to 1999, Dean of the Faculty of Law of the University of Windsor and was appointed a Judge of the Court of Quebec for the District of Montreal in 1999. From 1982 to 1985, she was a member of the Canadian Human Rights Commission. She is well known for her role in establishing the Conseil des communautés culturelles et de l’immigration du Québec, over which she presided from 1985 to 1990.  She was Ontario’s first Employment Equity Commissioner, from 1991 to 1995.

Juanita has a long history of community involvement in human rights and equality issues, both nationally and internationally.  She was a board member of the Canadian Chapter of the International Association of Women Judges from 2003 to 2009 and a co-chair of the Equality and Diversity Committee of the Canadian Association of Provincial Court Judges from 2004 to 2010.  Before moving to Toronto, she was an active member of the Congress of Black Women of Canada, Montreal Regional Chapter; many projects addressed issues relevant to immigration, education and health issues. One of the major undertakings was the coordination of an annual day of solidarity with South African women on August 9th, which mobilized both English and French women’s groups; another was the campaign to have discriminatory material removed from a student reader in public schools. She was one of the original members of the former Court Challenges Program established by government to fund cases developed by equity seeking groups, invoking the new equality provisions in the Canadian Charter of Rights and Freedoms