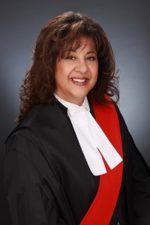 The Honourable Madame Justice Micheline Ava Rawlins was born in Montreal, Quebec in 1951 to Pearl and William Rawlins, both of whom had moved to Canada to attend McGill University.  Her formal early education there culminated in an undergraduate degree at McGill University in 1974. She moved to Windsor, Ontario to attend Law School in 1975, graduating with an LL.B. in 1978 and was called to the bar in 1982.

She worked as a defense counsel and part-time Crown Attorney in the City of Windsor prior to accepting a position, which she held from 1986-1992, as an Assistant Crown Attorney in Chatham, Ontario.  In October 1992, Justice Rawlins was appointed to the Provincial Court of Ontario (now the Ontario Court of Justice) sitting in Windsor, Ontario, as the first Black female Judge in Ontario and the second in Canada.  She also served as the Local Administrative Judge for seven years.

Prior to her appointment, Justice Rawlins served on many Boards and Associations, including the Girl Guide, Boy Scouts, Windsor Media Council, and the Race Relations Committee for the Windsor Board of Education and Christchurch Anglican Church.   She sat on the Board of Governors of the University of Windsor from 1985-87 and again from 1995-2004, was President of the Chatham Youth Soccer Association from 1990-1993, participated as an Assistant Hockey Coach from 1996-98 with the Windsor Minor Hockey Association,  achieving her Trainer Qualifications in 1998, travelled to Ottawa on behalf of the Judiciary, to sit on the Social Context Advisory Committee coordinated by the National Judicial Institute; and served as President of the North American Black Historical Museum (2003-07 and of the Association of Black Judges of Michigan.