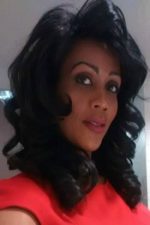 Gwyneth Matthew-Chapman, who hails from St. Lucia, grew up in New Village, Castries and attended the Anglican Primary School, before migrating to Canada in 1976, measures her success not by personal self-aggrandizement, or net worth, but by how much she can give to make the lives of those around her, those in her community, in her homeland and in Canada, better. She is a Television Broadcaster, Producer, Motivational Speaker, and a long-time Community Advocate and organizer, President of the Canadian Black Caucus and Inspiring You Media Productions and Special Advisor, Youth Engagement & Development to the Office of the Mayor.

Gwyneth is a visionary, a strong advocate for youth and, a community leader who is, respected for her ability to get things done, to get the attention and support of those in power. Her dynamic and spirited individuality is exemplified through her work with young people in numerous communities and youth organizations in Ontario. Her belief in representing underprivileged people, underpins her compassionate promotion of the numerous issues prevalent in those communities, and the individuals for whom there has been little representation.