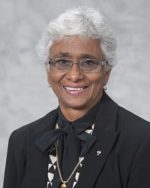 Kamala-Jean whose ancestors moved from India to Jamaica, was born in Jamaica and moved to Canada in 1963, after spending fifteen months in New York attending business.  While spending her formative years at a Quaker boarding school and an Anglican girl’s high school in Jamaica, she learned that equity and justice could be used as avenues to overcome discrimination and racism.   She holds a Bachelor of Arts (1975) and a Master of Education (1990), degrees from the University of Toronto.  She taught in elementary schools and was a teacher, librarian, consultant for equity in the curriculum and university lecturer before retiring in 1998. She is best known for her community activism within Toronto.

She served as President of the Jamaican Canadian Association from 1979 to 1980 and was a member of the Ontario Advisory Council on Multiculturalism and Citizenship from 1980 to 1984.  She later served as Chair of the Urban Alliance on Race Relations and was a founding Director of the Black Business and Professional Association in 1982.  In early 1986 she was appointed to the Ontario Housing Corporation and became Chairperson of the Harry Jerome Scholarship Fund for Black Canadian athletes. Later in the same year, she helped to organize a Toronto dinner for South African anti-apartheid leader Desmond Tutu.

Ms. Gopie served on the Ontario Race Relations and Policing Task Force in 1989. She has received several awards for her community activism, most notably the Order of Ontario in 1996.  She served as a Governor of the University in the 1990s and was appointed to the Federal Immigration and Refugee Board in 1998.  The University of Toronto offers a Kamala-Jean Gopie Award to Undergraduate students that have ‘demonstrated an interest in issues concerning women of Indian descent from or in the Caribbean.