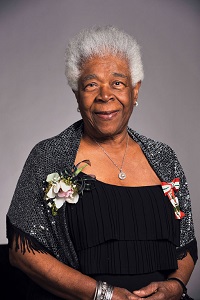 She was invested into the Order of Ontario, in 2011, the province’s highest honour, for her work with Sickle Cell Association of Ontario. She was named Toronto Public Health Champion in 2009 and has received numerous community and academic awards. Her career culminated in being named the Province’s first Black Director of Public Health, in Leeds-Grenville and Lanark, Ontario. She published her autobiography, My Dream, in 2014.