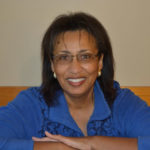 Sylvia Wilson, like many families, has a varied cultural background. Maternally, she is of African, English and German descent; paternally, she is dominantly Irish.  She is the 7th generation direct descendant of Canadian Black settlers of Grey and Simcoe Counties. Her family resided in Collingwood before it was incorporated as a town.  Growing up, she worked in her grandparents’’ business – Sheffield’s Cedar Inn Restaurant & Tourist Resort (1945-1971) catering mostly to Black American visitors, providing a safety and comfort zone.

In 1990, her late Uncle Howard Sheffield began promoting the family ancestry for Black History Month. After his passing in 2008, Sylvia and her sister, Carolynn, have continued as the owners of Sheffield Park Black History and Cultural Museum, promoting and preserving the stories and accomplishments of black pioneers, past and present.  As a northern terminal on the Underground Railroad, it was their privilege to share their Canadian roots (and snow!) with 500 American visitors in 2015 for the Martin Luther King, Jr. Ski Weekend.